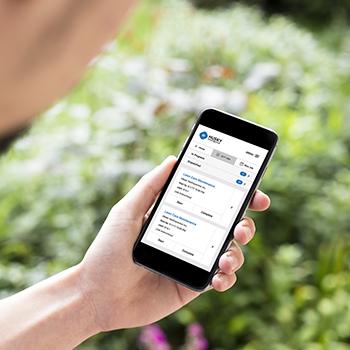 Cell Phones: A brief history of an addiction

Ah, yes.  The cell phone.  Our trusty side-kick and companion.  We talk through it and it talks back.  We can do just about anything with our cell phones, including sending emails, taking pictures and videos, and streaming our favorite movies and television shows.  Without it, I’m certain most of us would be (figuratively) lost.

Our phones have enabled us to shop on the go and even work while away from the office.  With how fast technology is advancing, our phones can be automated to run many of our daily tasks.  As phone technology grows, so does Husky Intelligence; we do not intend on stopping any time soon.

History and people behind technology

The precursors to mobile phones can be seen in the early 1900s.  Most notably, the Germans tested a mobile telephone device that was used on military trains traveling across the country during World War I.  During this time, many other countries began working on mobile telephone technology, including the British, Americans, and even the USSR.

Fast-forward a few decades and companies like AT&T and Motorola were working on creating mobile cellular devices and services.  Originally, the purpose of cell phones was for people to drive and talk at the same time.

In 1983, Motorola launched the first cell phone to the world: the DynaTAC 800x.  It was priced at a “reasonable” $4,000.  With this price tag came many great features, like a 30-minute battery life while on the phone and the phone was the size of a five-dollar footlong at Subway.

However, despite the device being rather large and clunky, the fact that it did not have the restraints of wires was appealing to many.  Motorola spent over $100 million and a decade developing the first ever mobile cell phone.

Since the release of the Motorola DynaTAC 800x, cell phones have advanced greatly.  The cell phones we have today fit in the palm of our hand,  and we can video chat with others and browse the internet.  A lot of employees in the workforce do most of their work on phones nowadays.  We set up meetings and take calls with clients.  Companies such as Apple and Samsung even have their own AI assistants, which can remind you to perform certain tasks, answer questions using the internet, and even crack a joke or two.

Once upon a time I had a cell phone that was shared between my brother, step-father, and myself.  It was a blue Nokia that had a one-inch screen, antenna, and weighed about half a pound.  The phone was only used for phone calls between the family and in case of an emergency.  Today, almost everyone possesses a cell phone, including some as young as five years of age.  How has this effected people today?

First, it enables us to be in contact with others in less than a minute.  Second, we can leave the house and use it to take pictures and videos and then upload them to social media platforms like Instagram and YouTube.  Before, you had a separate camera or video recorder which you had to plug into the computer, download the software, and then convert the file to MP4 or WMA in order to watch it.

Third, we can work away from the office or home.  Fourth, we can compare prices while at the store by bringing up a competitor’s website.  The list goes on.  Obviously, the cell phone has affected us greatly.

On my Samsung Galaxy S8, I can do everything my laptop can do, if not more.  So, what more can cell phone companies do to grow and advance their products?  Besides the often requested longer battery life, screen resolution, and camera quality, what more can they do? How would you like it if the phone was implanted in your head?  That is what many influential industry leaders believe will happen when they were asked by the World Economic Forum earlier this year.  Many leaders believe that these phones will be available as early as 2023.

Our phones have made life easier.  Whether it is for pleasure or for work, these phones have helped us in many ways, including automation of reminders and tasks.

Husky Intelligence wants to make your field service management business operate more efficiently and effectively.  Our mobile capability with the software enables you and your team to access the software out in the field.  You can create quotes, work orders, invoices, and more all from your cell phone.  As phones continue to grow, so will Husky Intelligence.

Want to learn more about our FSM software? Contact us!